When considering which telescope to get, many people come across the Zhumell Z8 telescope and aren't exactly sure what to think. It isn't one of the big name brands like Celestron and Orion, however it's still quite well known (plus they're made by the same company that make some of Orion's telescopes).

When considering which telescope to get, many people come across the Zhumell Z8 telescope and aren’t exactly sure what to think. It isn’t one of the big name brands like Celestron and Orion, however it’s still quite well known (plus they’re made by the same company that make some of Orion’s telescopes).

As a Dobsonian telescope, we should pretty much know exactly what to expect of it – a decent amount of power. So how good is the Z8, and what type of astronomer is it most suited to? We’ll look at what the telescope has to offer, it’s specs and whether it’ll be a good choice to add to your collection. 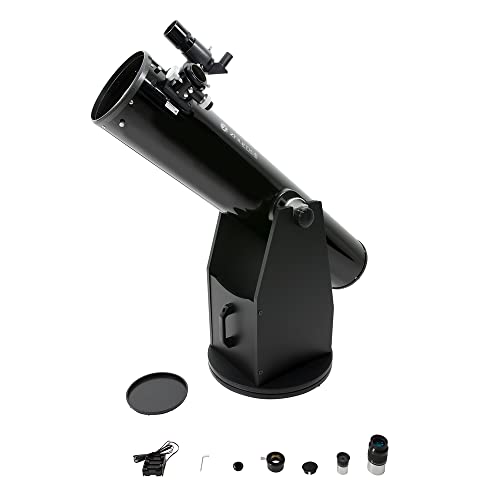 The Zhumell Z8 is a pretty well known telescope amongst astronomers – it’s part of the brands main line. For many more advanced astronomers, it represents an easy to use and simple telescope, although it is probably more suited to beginners.

It comes with an easy to use laser collimator too, which is definitely key for a Dob. Anyway, let’s look at it in a closer detail to find out more about it.

You can see the specifications of this telescope, which will give you a better idea of whether it’s the right choice for you.

There’s a few different main things to mention about the Z8, with the first being it’s size! Although some people think it’s okay to move around, it’s definitely a big telescope and it will arrive in two large packages. It will probably take an amateur astronomer around half an hour to get everything set up properly and ready to use.

It uses a pretty standard Crayford focuser to allow yourself to focus the telescope properly. Like other Dobsonians, it represents a good option for beginners who are willing to learn. Unlike automated telescopes, a Dobsonian requires a lot of effort and adjusting, which might be more difficult at first.

However, in the long term this can prove advantageous later down the line and you get better and better.

It has a large and robust build, which make it a very reliable telescope to use. This also gives it a good weight, and it can be used easily either stood up or on a chair or stool.

Although this telescope has a good 8 inch aperture, it does have a fairly short focal length of 1200mm. This gives us a fast focal ratio of f/5.9, which means that this telescope is largely suited to wide angle views of the night sky. However if you match it up with the right eyepiece, then you can still get a good look at deep sky objects.

The 8 inch parabolic mirror will allow the telescope to gather a lot of light, which enables you to get a bright enough image for you to see.

A good thing about the Zhumell Z8 is that you’re able to get a lot of aperture for a relatively good price. This is typically the case for Dobsonian telescopes, as they’re a cheaper option than other types of telescopes, like reflectors.

Another thing I like about Zhumell telescopes is that they have some of the best and cheapest accessories on the market, so it’s easy to buy accessories to match your telescope. There was thoughts that the brand was being discontinued, however they’re still stocked in all major telescope retailers.

The negatives about this telescope are few and far between, but there are definitely some that you should take into consideration before purchasing. They will undoubtedly have an effect on the optical quality of your telescope, which is the most important thing that most people need to consider.

Firstly, this telescope is heavy – I mean, too heavy to carry about with you anywhere. It’s more than 50lbs, which you might be okay with moving a few feet, but you’re not going to want to carry it on your back for any extensive period of time.

However, it is going to be a lot easier than the 10 and 12 inch Zhumell telescopes, but still not great. So, if you’re after a portable telescope, then I’d rule this one out.

In conclusion, the Zhumell Z8 is one of my favorite telescopes for people looking for a good, powerful telescopes. You can pick up this 8 inch dob for the same price as a 4 or 6 inch refractor, which will give you much more power and better bang for your buck. After you’ve finished using the included laser collimator to help set your telescope up, you can also use a dual speed Crayford focuser to get the most out of your telescope too.

The Zhumell Z8 Deluxe Dobsonian reflector is definitely of a high quality when you consider its price. So whilst this telescope isn’t exactly reinventing the wheel, it does everything you need it to pretty well.