Orion SkyQuest XT8 Review | Is it a good telescope?

Orion is a huge brand that manufactures premium-quality telescopes, binoculars, various optic gear pieces, and a huge array of accessories to complement their performance. Their two most popular series of telescopes are the Star Blast (one of my favorite cheap reflector telescopes) and the SkyQuest, which are a well known series of Dobsonian telescopes.

Today, we’re going to talk about one of their more recent telescope launches – the Sky Quest XT8 Telescope. This is a classic Dobsonian telescope, which manages to give you a decent aperture and light gathering for a relatively cheap price, especially when compared with a refracting telescope. Though, it’s definitely not perfect – let’s take a look. 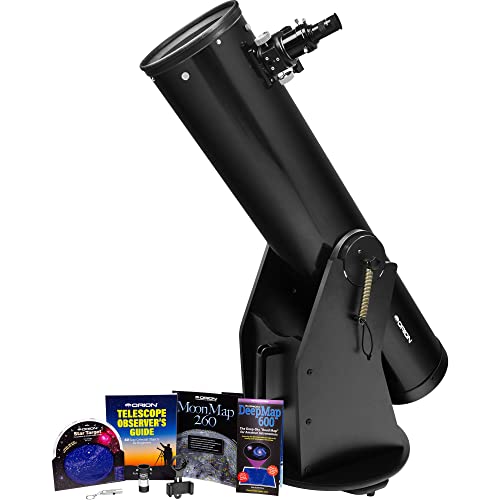 The truth is that the Skyquest XT8 is a solid telescope that works well for the majority of people that use it. It’s fairly simple and straightforward to use, and it’s ideal for viewing deep sky objects.

Most people who’ve used the Sky Quest XT8 loved it; it was a classic telescope outfitted with a myriad of top-quality features, but it seemed to be lacking in a few areas before we could label it as ‘perfect’. The main area where it lacks is in aperture, as although a 6 inch aperture is fine for getting started with, it probably isn’t going to be enough to see deep sky objects.

Aside from this, the two telescopes are quite similar, and they can both be used to get some great views of the night sky. It’s pretty safe to say that XT8 picked up where XT6 left off and filled the room left for improvements, and is the perfect telescope to pick up if you’re trying to pick out star clusters in the night sky.

In terms of aesthetics, Orion’s SkyQuest XT8 looks exactly like its predecessor; it features a Dobsonian Reflector design and a large 8-inch aperture (improved by 2 inches in comparison to XT6), superb 48x magnification, and it retained all the great features XT6 packs, such as 300x top theoretical magnification, long tubing, and sturdy construction.

This telescope does look pretty huge, and it’s more than safe to assume that it weighs a ton. Upon closer inspection, you’d realize that it actually weighs only 41 pounds, which isn’t terrible for a telescope of its size. So for an average weight, it has a surprisingly good build quality to match.

Overall, there are dozens of things to like even at first glance. So, why don’t we take a little bit closer look to see what it actually has to offer in terms of performance?

Orion’s SkyQuest XT8 telescope ‘hides’ numerous state-of-the-art technologies and features that are invisible to the naked eye. It rocks a 2-inch single-speed Crayford style focuser, a Red-Dot finder for convenience, and Aluminum and Silicon Dioxide optical coatings that deliver nearly unparalleled quality of its optical elements. Here are the main specs of the XT8 telescope:

As with many Dobsonians, the most difficult thing you’ll have to do with the telescope is set it up. This is helped by a red dot sight, though it can still take a little time. Its light gathering ability isn’t in question, and when you combine the telescope with accessories like a Barlow lens and some eyepieces, you should be able to spot a good variety of different celestial objects.

Orion’s XT8 rocks an 8-inch aperture that’s equally suited for moon watching, planet observation, and diving into (some realms) of the deep space. What’s so interesting about this type of aperture is that it complements all the other optical elements perfectly, making this telescope a very versatile one. It works just as great at ‘short’ range as it performs excellently at longer distances.

Furthermore, the mount this telescope is supplied with isn’t ‘special’ in the purest sense of the word, but its functionality is just brilliant. It offers the much needed stability to the scope and significantly reduces the need to recalibrate, re-adjust, or realign it. Apart from being balanced and stable, it’s also incredibly easy to operate.

The robustness of the XT8 is a feature unto itself; namely, this telescope is made from the sturdiest materials that are supposed to last decades, or maybe even centuries if used and maintained correctly.

Lastly on the note of versatility of Orion’s Sky Quest XT8, it also comes supplied with a 2-inch focuser that is compatible with most 1.25-inch or 2-inch standard telescope eyepieces, a 25-millimeter Sirius Plossl complementary eyepiece, a convenient EZ Finder reflex sight, a collimation cap, and Starry Night image processing software.

This telescope comes supplied with the 25-millimeter Plossl eyepiece, which works great at shorter distances; if you want to ramp up its performance, you can switch it with wide-field eyepieces (two-inch models).  For even more magnification, it could be a good idea to add a 2x Barlow into the mix as well.

Now, what’s really interesting about this telescope is the fact that it comes equipped with a solar-safe filter. This basically means that you can gaze anywhere close or even directly at the sun without burning the mirrors up. Its finderscope is pretty great for beginners as it’s a straightforward little red dot – it’s easy to use and doesn’t require too much practice to learn how to properly use it.

All Orion-made gear is well worth the buck, but is SkyQuest XT8 a right choice for you? With phenomenal optics and portability, as well as with large aperture and a balanced mount, most veterans would give it a shot. The good thing about it is that it’s available at a very affordable price, and it’s a wise choice if you want to see objects deeper out there in the solar system.

On the flip side, it rocks all the features a beginner needs to embark on an unforgettable journey of star-gazing and space observation. Amateur astronomers that are just getting started will probably consider this to be a great telescope.

Like any telescope, it is going to be best used out of the city, far away from any light pollution which could obscure your view. It has its ups and downs, and it certainly isn’t ‘perfect’ true to form, but it’s a highly valuable Dobsonian telescope that is worth every cent.