When it comes to low budget telescopes, there are a couple of different brands that most people look for. One of the least well known is Carson, who many amateur astronomers have never even heard of. Whilst they’re not as well known as Orion and Celestron, that doesn’t mean you should ignore what they have to offer. So, we’re going to take a closer look into the details of this telescope.

As a Newtonian reflector, this is one of the cheapest models available on the market right now. That is represented in its pretty low 3 inch aperture. With this kind of power you’re not going to be able to see much detail in any deep sky objects, but it could be useful for getting to grips with things if you’re just starting out. You can see how it compares to other similarly low priced telescopes here in our list of telescopes under $200. 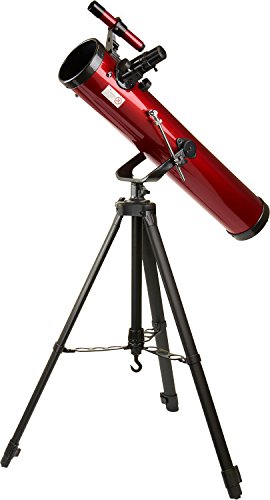 The telescope itself actually weighs only around 8 lbs, which is the benefit of going for a lower aperture telescope like this one. This makes it quite easy to pack up and take with you anywhere, so it’s an ideal choice if you’re looking for something to take into the countryside with you. As well as this, it does well in cold temperatures and doesn’t fog up, which is key when stargazing late at night.

In conclusion, at a low price I wouldn’t mind opting for this reflector if I was looking to have some fun with the kids. It’s far from perfect and it’s one of the least powerful options available. If you want to make the most of this Carson telescope, then you’re going to be best off pairing it up with a good Barlow lens and eyepieces too. This way, you’ll be able to get a good wide field view without any attachments, and you can use them whenever you want to get a better view.