Best Telescope under $300 – Why a Dobsonian is Best

For those new to astronomy, it can appear a daunting hobby. Just a telescope mount alone can cost hundreds if not thousands, so many people just avoid giving astronomy a chance altogether.

However, even if you don’t want to spend a ton of money on a telescope, you can still find a good telescope out there for just a few hundred bucks. Most commonly I’ll recommend reflector telescopes to new astronomers, especially Dobsonians. If you can afford a bit more, then check out these telescopes under $500.

Anyway, I’ll get into the details of why Dobsonians are great for beginners later. For now, let’s take a look at some of the best telescopes you can buy now for less than $300. 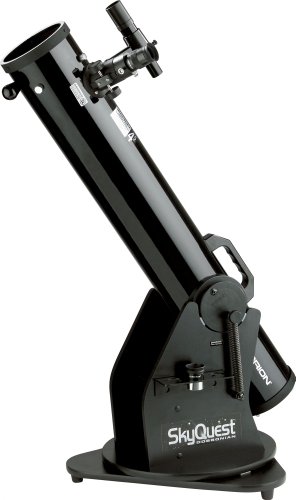 The Orion Skyquest XT4.5 is one of my favorite telescopes and you can get it for a decent price, too. It has a 4.5 inch aperture and a 900mm focal length, giving it a focal ratio of f/7.9. It’s one of the best cheap reflector telescopes you’ll be able to find online.

A Dobsonian allows a large amount of light to be gathered, much more than a refractor telescope or a Cassegrain of the same aperture. This can give us a better view of dark and dim objects out there in the solar system.

So with a Dobsonian, you’ll have the ability to see more than you could with an equivalent refractor telescope. This telescope also comes with two eyepieces and a variety of other accessories which will come in handy. It’s one of the best telescopes under 300 dollars you can purchase right now.

Verdict: This high quality telescope is one of the best options if you’re trying to stick to a low price range.

The Celestron Powerseeker series has been one of Celestron’s bestselling telescopes for years now, and it’s often recommended for those just getting started with astronomy. Whilst refractor telescopes are a good idea if you don’t want to spend time aligning your telescope, for the most power a reflector telescope like this one is definitely a good idea. It has a 5 inch aperture and a 1000mm focal length, giving it a focal ratio of f/8.0.

As I’ve said, a reflector telescope is probably your best option if you’re looking for get a telescope for less than $300. Although it’s cheap, this telescope uses a German equatorial mount, which is what many more advanced astronomers use further down the line.

So, it can give you a chance to get used to using an equatorial mount, as typically if you’ve used a mount before, it will typically have been with a camera. Cameras generally use Alt-Az mounts, not equatorial mounts. Equatorial mounts are designed to rotate on one axis, which may see weird at first, but it actually makes it a lot easier to track celestial objects in the night sky.

Although this is a large telescope, it’s still relatively portable. So, if you want to take it out of the city then it will easily pack up and fit in the back of a car. This telescope comes with two eyepieces, a Barlow lens and the ability to download software that can help you get started. This is another great telescope for those who are just getting started.

Verdict: A well known starter telescope, the Powerseeker series is the perfect option if you’re looking for your first telescope. Plus, the slow motion controls will give you the chance to 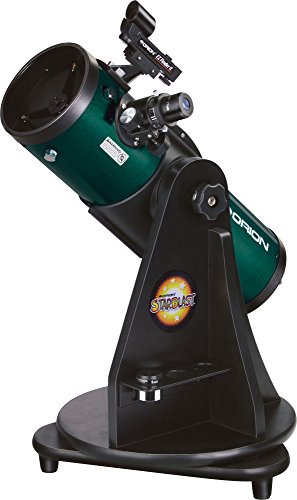 This is another Orion telescope, and you’re probably wondering what the differences are between this and the SkyQuest model which I love. Well, there are a few differences and reasons why you might want to pick this option over the Skyquest.

The SkyQuest XT4.5 is a fantastic telescope when you’re using it at high magnifications. This means if you want to get close up views of planets. then it’s perfect. Where it struggles sometimes is getting a wide angle view of of the night sky. The Starblast is more equivalent to a set of binoculars in terms of it’s viewing capabilities – it just doesn’t have the same power of the XT4.5.

Some good points that you might like about the Starblast is that it comes with a red dot finder – this won’t be for everyone, as although I don’t mind it, some people don’t like to use a red dot finder at all. The Starblast also feels much more even when you’re controlling it, as it doesn’t have the same spring mechanism set up the XT4.5 does.

The Starblast offers another decent quality telescope, but it lacks a little in power in comparison to the telescopes I’ve already mentioned. With it’s 4.5 inch aperture and 400mm focal length, you’ll have a very fast focal ratio of f/4.0.

Verdict: One of the best overall telescopes that you’ll find on the market at less than $300. 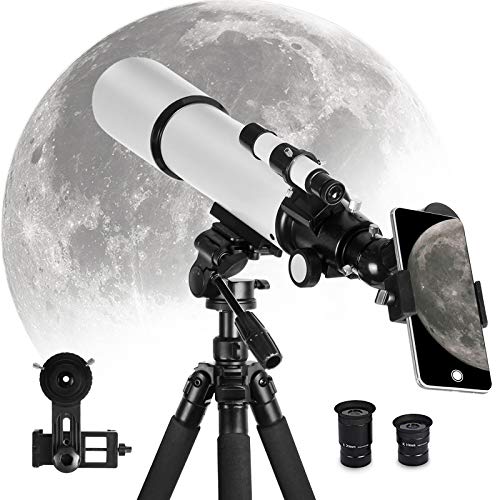 Though you wouldn’t be alone in not hearing of this brand before, many telescopes at a low price point are made by alternative brands. The truth is that many of them actually use the same suppliers, meaning that there’s not too much difference in them.

What I like about this refractor is that it has a slightly increased aperture compared to other similar telescopes within this price range, so you can gather light very easily. Though it may not quite fulfil the needs of more advanced users, it’s a great choice for novice astronomers.

It comes with a smartphone adapter that you can use with the telescope too if you’re interested in getting started with astrophotography. It doesn’t any collimation either, which is a common reason why people go for a reflector telescope like this over a Newtonian or Dobsonian, which can take a while to set up.

Plus, with a sturdy tripod and two eyepieces for you to use, it’s pretty good value for money overall. So whilst it may not be able to compete with more expensive telescopes, within this price range it definitely holds its own.

Verdict: If you’re dead set on getting a refractor telescope, then I’d advise that you check this one out made by OYS. It’s ideal for those looking for something that’s easy to use, which isn’t commonly found in budget telescopes. 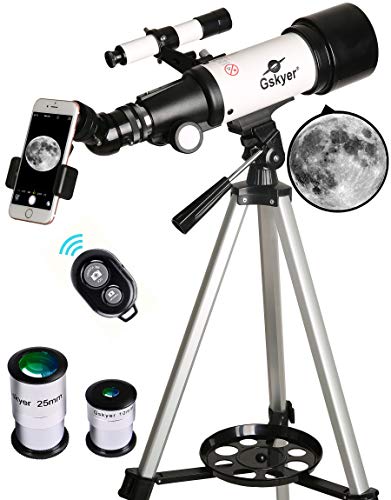 If you’re just getting started with astronomy, you don’t need to spend a ton of money. Actually, if you’ve never tried astronomy before then you might not even need to spend $300! It might be a better idea to pick up a super cheap telescope like this Gskyer refractor telescope and see how you get on with it.

You actually get a lot for your money with this package. It comes with two eyepieces, a barlow lens (3x), a small finder scope and a tripod mount. It also includes a smartphone adapter and a wireless remote which allow you to take photos very easily.

For beginners, you can’t ask for much more. In terms of the specifications, the telescope has an aperture of 70mm and a focal length of 400mm, giving us a focal ratio of f/5.7. If you combine with the the 10mm eyepiece, you’re going to get a good amount of magnification.

From a negative perspective, this telescope isn’t the highest quality. For those that was to take their astronomy seriously, you’re probably better off purchasing something a little more expensive. But, there are some people who buy a telescope, use it once and leave it to collect dust in the corner – if you’re one of these people, then a cheap telescope like this is probably a better idea.

So, this would be a great idea if you want to start exploring the night sky for a low price. Never mind telescopes under 300 dollars, you can get this for much less than that and it isn’t a bad place to start.

Verdict: For those just embarking on their astronomy journey, this might be the perfect choice.

Can I see Venus with a telescope?

You can see the planet Venus with a telescope, but it’s actually a lot more difficult to see properly than people think. Many astronomers choose to view Venus in the daylight, as trying to see it before sunrise or after sunset can be hard as it’s surrounded by haze. Plus, Venus is actually clouded by a thick fog, so seeing the planet itself is notoriously difficult. You may be able to see Venus with the best telescope under $300 if you have some good accessories, and you’re lucky with the weather too.

What eyepiece should I get with my telescope?

Pretty much any telescope can work really well with a 1.25″ eyepiece, as this won’t increase the magnification too much. You can get a larger eyepiece than this if you want to see things in greater detail, but it isn’t always necessary depending on which telescope you have. A 2 inch eyepiece can also be very valuable, and they tend to be better if you’re trying to get a wide field of view.

What does the F number mean in regards to telescopes?

What type of telescope is a Newtonian?

A Newtonian telescope is a type of reflecting telescope. It takes it’s name from, you guessed it – Isaac Newton. Newton invented the telescope by using a concave primary mirror to reflect onto a flat mirror positioned diagonally to get the best result. Though if you want high quality optics you’ll have to up your budget significantly, reflectors offer excellent value.

Why do you prefer a reflector telescope?

As mentioned earlier, for beginners and those looking for a cheap telescope, I much prefer a reflector as opposed to a refractor telescope. You’re going to be able to see more with the reflector telescope due to the amount of light it gathers. Dobsonian telescopes are my favourite type of reflector, especially when it comes to finding one on a tight budget.

Why do you recommend a Dobsonian?

Why a Dobsonian? Well, John Dobson (the creator of the Dobsonian) was an amateur astronomer himself. He created the Dobsonian himself as an alternative to the professional telescopes that were prevalent in the sixties, as it wasn’t easy for amateurs to partake in the hobby. Generally, Dobsonians are considered to be a good telescope for beginners. They may not always have a large aperture, but this probably isn’t necessary if you’re just getting into astronomy. They can make things easy for you, so a telescope with high power probably isn’t worth it at the start (you can pick one up when you get a little bit more experienced!).

All in all, these are just some of the best telescopes you can find for less than $300. Of course, there are other types of telescopes like Cassegrains, but typically they’ll cost a little more than $300. If you’re looking to get in depth views of celestial objects and the solar system, I’d advise you to go for a reflector over a refractor telescope.

For most people who are just getting started, one of the telescopes I’ve listed should be more than enough to get you going. If you have any questions, please feel free to leave a comment below.