After you start to take your astronomy seriously, you’ll realise that it can be an expensive hobby to have. Sure, you can get by with a few hundred dollars worth of telescope and the accessories it comes with for a while, but if you want to take the next step up, many top telescopes go into the thousands of dollars.

Fortunately, there are some telescopes that aren’t that expensive, and you can still find a great deal for less than $1000. It really will depend on what you’re looking for in a telescope. You could also consider spending a little less and getting a telescope for $500.

If you’re looking to take your astronomy seriously, then you’ll want to opt for a refractor. However for newbies, I prefer the computerized telescopes that have the ability to find planets and constellations easily. But where can you find these telescopes without spending too much? Well, we’re going to check out a few of the best telescopes that you can find now for under $1000.

The Celestron Nexstar Series is my favorite series of telescopes (it’s number 1 on my list of the ultimate best telescopes). They range all the way from the 4SE up to the 8SE, with the number just representing the aperture of each telescope. Unfortunately the 8SE usually costs a little more than a thousand dollars, but you could still consider getting the Nexstar 5SE.

The Nexstar 5SE is a computerized telescope – it’s really easy to use once you get the hang of it. You can enter your co-ordinates into the panel on the side of the telescope (you can find your co-ordinates on any smartphone) which will enable you to use the finder.

After you enter some details (your location, the time etc), you need to make sure that the finder scope is properly aligned with the optical tube. This is easy and you can do it just by using the alignment scrolling wheels at the base of the tube. When this is done, you can start the fun!

With the automated mount and the 5 inch primary mirror, you’re easily able to see a vast array of objects, like the moon and planets. The telescope can track tens of thousands of different objects in the sky with great accuracy due to the lengthy database. This can make it very easy to find galaxies and nebulae, and the computerized finder is one of the things that the Celestron Nexstar 5SE telescope is known for.

Whilst this isn’t great for astrophotography – that’s probably it’s weak spot – it’s definitely a great place to start. You’ll end up with some star trails that you wouldn’t get with a refractor telescope, but that’s something you can learn to deal with over time. All in all, this is one of my favorite telescopes and the Celestron Nexstar 5SE would be a perfect addition to your house.

Verdict: One of the best telescopes if you’re new to astronomy and are happy to dedicate some time into learning how to use it.

Another good choice if you like the idea of a computerized telescope is the Skyquest XT6i. It’s a high quality telescope that is ideal for beginners or more advanced astronomers. The XT6i has a 6 inch aperture, which is enough power to see celestial objects easily.

It has a focal length of 120mm, which gives the telescope a focal ratio of f/8.0. The telescope comes with a focuser, two eyepieces (10mm and 25mm), a finder scope and a collimation cap too.

Where the Nexstar series are Cassegrain telescopes, this is a Dobsonian. The main advantage of having a Dobsonian is that you’ll get a larger aperture for the same price, or even cheaper than a Cassegrain or a refractor. It’s definitely a deluxe Dobsonian reflector telescope, although it’s actually fairly affordable.

If we’re considering the negatives of this telescope, the only things that I can really think of are getting it set up and ready to go. For example, the finder scope can be a little difficult to align properly, but once it’s done it does its job well enough.

Also, the instructions could be a lot clearer than they are, and for a novice it might take some time to get the telescope set up properly. But once it is set up, it’s a great telescope for looking at the night sky.

Verdict: Another awesome intelligent telescope that can help you on your astronomy journey, whether beginner or intermediate. 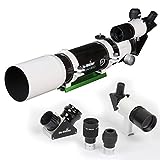 This model is an apochromatic refractor, as opposed to an achromatic refactor. The difference being that an apochromatic, often abbreviated to APO, brings in three different wavelengths colors into focus instead of two. For us, this means that an APO practically eliminates any chance of chromatic abberation, or color fringing. This makes it the perfect telescope for astrophotography.

In terms of the specifications of the telescope itself, it has an aperture of 80mm and a focal length of 600mm, giving it a focal ratio of f/7.5. It’s an ideal telescope for those who want to use something for wide field of view, and it will allow you to see a vast amount of different nebulae and galaxies.

Of course, you could use this telescope as a spotting scope, but you’d likely want to buy a good telescope mount (preferably an equatorial mount) to go with it. This means that with the mount, you would be spending well in excess of a thousand dollars, so it might not suit if you’re on a tight budget.

Verdict: This telescope offers a lot when it comes to astrophotography, and it’s ideal for wide view looks of the night sky. 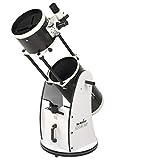 Another good choice to consider if you’re looking for a telescope that is less than $1000 is this Skywatcher Dobsonian telescope. It’s available in both a 8 and 10 inch aperture model. But, ideally we want the 10 inch model to get the best view we possibly can at a relatively cheap price.

With the 10 inch aperture and the 1200mm focal (giving us a focal ratio of f/5.0), this telescope is perfect for those that don’t mind having a big powerful telescope that takes up quite a bit of room. Of course, one of its selling points is that you can easily collapse the telescope so it takes up significantly less room, but it is still quite large.

It’s quite heavy too, so it’s not going to be ideal for those that want to use this as a portable telescope (although it’s advertised as such). It’s very easy to set the telescope up – after screwing in the primary mirror properly, all you really need to do is set up the finder scope and you should be good to go.

As Dobsonian telescopes go, it’s a very easy set up and you’ll soon be able to look at celestial objects at will. If you combine the power of this telescope with a Barlow lens (it doesn’t come with one), then you’ll easily be able to see Jupiter, Saturn, and an array of other objects up in the night sky. For the price, you do get a good deal but it will be harder for a beginner to use this telescope than if they used one of the computerized options I mentioned.

Verdict: This is one telescope that you’ll definitely want to consider if you’re looking for a low of power.

Although there generally aren’t a lot of different Maksutov Cassegrain telescopes out there to choose from, one you can consider is this Orion Starmax. It has a 5 inch aperture, and a focal length of 1450mm. This give us an overall focal ratio of f/11.4, which means that it’s more suited to high powered narrow field viewing. If you want to see the rings of Saturn, this would probably do the trick.

The telescope itself is pretty small, but that shouldn’t put you off. It’s overall a well built device, using an EQ mount as opposed to an Alt-azimuth mount. Orion are known for producing some cheaper telescopes, which you may associate with a reduction in quality. But the Starmax goes against the grain, and although it’s not an advanced telescope by any means, it’s definitely well made.

Even though it’s quite a basic scope, it is fairly heavy, which means that it’s unlikely to be a good option if you’re looking for something portable. This is largely due to the aluminium tube, which is definitely a step up on the plastic telescopes you can find online.

Altogether, it’s ideal for those looking for something with a little more power than your average budget telescope. You’ll be able to spot space objects fairly easily with this one, so it’s definitely worth giving it a go.

Verdict: One of the most popular Maksutov Cassegrain telescopes on the market, it’s still worth checking out. It has a pretty long focal length considering its short telescope tube.

Most commonly asked Questions about Telescopes

How powerful does my telescope need to be to see planets like Jupiter?

Well, Jupiter specifically is actually quite easy to see because it’s actually the biggest planet in the solar system. Even with a budget telescope, you should be able to see the moons of Jupiter. Jupiter is quite a bright planet, so even with a 5 or 6 inch refractor telescope you would be able to see it relatively clearly (however, magnifying your view too much will make Jupiter blurry!).

How much does a really decent telescope cost?

This really depends on how much you can afford, but in my mind you can get a good telescope for between 500 and 1000 dollars. Are you going to be able to get the best telescope ever? No, probably not, but it will certainly be good enough to see celestial objects. It’s also important to consider other things you need, like a mount (I like an equatorial mount) and lenses, which can make it easier for you to see faint objects in the dark sky.

What focal length should my telescope be?

There is no set focal length that your telescope should be. Obviously, your idea focal length will change depending on what aperture your telescope is. In fact, for those who are looking for a beginners telescope, a shorter focal length may actually be best. A wide field of view isn’t necessarily a bad thing, and that’s what you’ll get with a telescope that has a low focal length.

How can I increase the focal length of my telescope?

What telescopes do professional astronomers use?

What deep sky objects can you see?

If you’re looking to see some of the object in the sky which aren’t stars, then there are a few good places that you can start. One of the easiest deep sky objects that you can see is Orion’s Nebula, which is just south of the constellation Orion. It’s extremely bright, and even visible to the naked eye between November to February. Another good deep sky object is the Whirlpool galaxy, which is located near the Big Dipper. Once you get the right telescope, it will become quite easy to find objects.

Hopefully this has given you an idea of what telescopes under $1000 are currently available on the market. You can consider getting a Dobsonian telescope or a Newtonian telescope which will have a higher aperture than a refractor/Cassegrain, and probably a lower price too.

My verdict is that the Celestron Nexstar series offers the best telescopes under $1000. They’re easy to use, fairly powerful and are more than enough to see anything you wish to. If you have any comments or questions, as always feel free to leave them below!

I'm Alan, and I'm the owner of Odyssey Magazine. My dad bought me my first telescope as a teenager, and I've been obsessed with the universe ever since. We created this resource to try and help kids and adults learn more about astronomy!

Could we live on Neptune?