Any astronomer will tell you how important a good telescope mount is to your success in exploring the night sky. For beginners, the telescope mount is actually something that many people overlook. A good mount is an essential part of your astronomy kit, especially if you’re interested in astrophotography.

The first thing you’ll need to think about is the type of telescope mount you’re going to go for. Both altazimuth and equatorial mounts have their own benefits, and one will probably be better depending on your needs, as EQ mounts tend to be quite different to Alt-az mounts. But, I’ll get into that a bit more in a minute.

So if you’re looking for the best telescope mount, then I’m going to run through a couple of the options that you have to get started. Hopefully then, this can help you decide which one might be best for you. 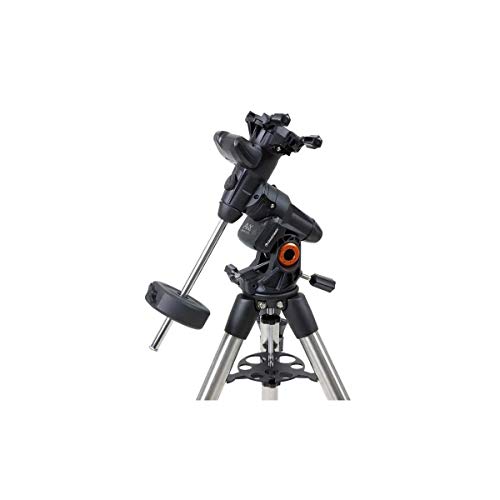 The Celestron VX Mount is well known with astronomy circles for being the mount you buy when you’re first step up into a more advanced level of astronomy and astrophotography. It’s a popular option and considered as the best mount around for a few reasons.

It will be an upgrade on pretty much any base level mount for telescopes like something from the Nexstar series, or the Orion Apo Refractors – you can usually pick these up for under $1000 if you shop around. This German equatorial mount has pretty much everything you could need.

You can easily attach any of the APO refractors that you’ll find for sale online very easily. Bear in mind that if you’re going to use a heavier telescope, then you might need to order some additional counter weights to keep the telescope level. It has a high load capacity of 30lbs, which should be enough to hold a powerful scope. It would be better with two counterweights, but it only comes with one that’s pretty heavy.

If you want to get rid of field rotation completely, then you’ll need to upgrade to a mount like this one. It isn’t the lightest telescope mount out there, but it’s still lightweight enough to be packed into the back of the car if you travel outside of the city for your astronomy. It’s very easy to align, and you’ll be tracking stars in no time with the VX.

And when it comes to telescope mounts for astrophotography, you’ll often find this model mentioned as a viable option for spotting celestial objects. An equatorial mount compensates for the Earth’s rotation, and all you’ll need to do is make sure that the telescope is aligned to the South celestial pole.

Even if you have no experience, then the VX mount is a great starting point for those ready to take a step up in level. So if you’re searching for a reliable mount that is ideal for long exposure astrophotography, this is probably your best bet.

Verdict: All in all, there’s a reason why this is always considered as one of the best telescope mounts for those just getting started. It’s a safe choice if you’re looking for an astrophotography mount that has a computerized GoTo system. 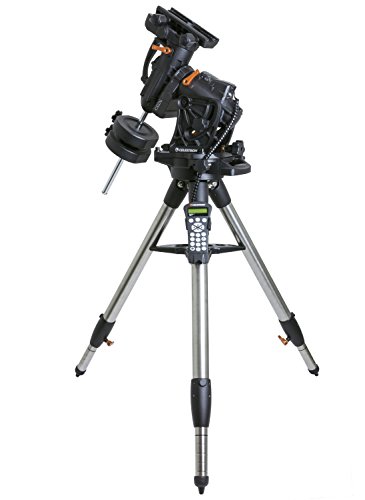 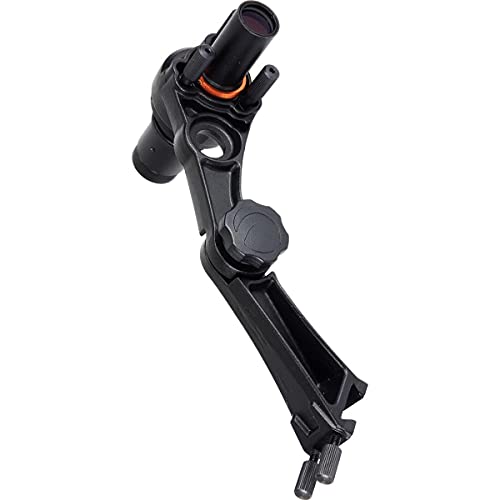 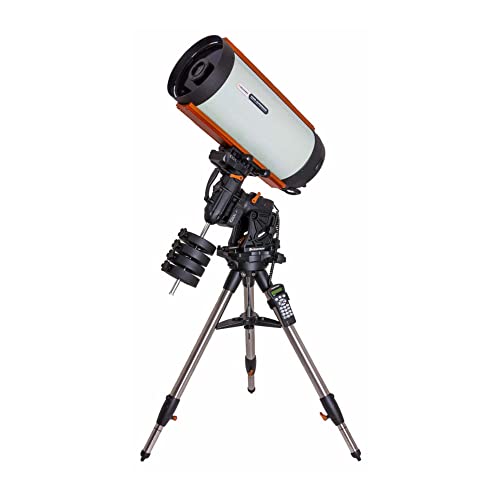 This is a computerized German equatorial mount that has spring loaded worm gears, which can make your use of the telescope much smoother. As with most high grade Celestron mounts, you’ll get their Periodic Error Correction. This will record all of the guiding corrections over the course of a complete turn of the worm gear.

You can use a mobile phone with this one, but you’re much better off pairing it with a DSLR camera if you want to get clear images of the Milky Way and other objects in the night sky. It’s really made to be used by a more advanced astrophotographer that’s looking to take long exposure shots. So, it really appears to the astrophotography community more than anyone else.

Verdict: Our favourite option – if you have a telescope weighing a lot and need something that can cope with a larger weight capacity, you aren’t going to get any better than the CGX. Just keep the high price in mind, which is typical with GoTo mounts anyway. 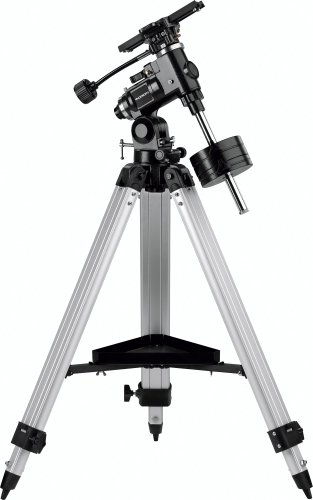 For those looking for a slightly cheaper yet still perfectly capable equatorial mount, the Orion Astroview EQ mount might be a good choice. It can cope with telescopes up to 12lbs in weight, and the single-axis motor drive makes it very easy for you to follow stars.

This telescope mount actually has a mini motor which you can attach to the mount. This can make it possible for you to track objects without having to do it manually, as the motor will power this and do it automatically. Fully manual mounts are typically a little more difficult to use.

It also comes with a dovetail plate, which should give you the capabilities to attach any telescope you need to it. It comes with a handheld controller that enables you to control the electrics, and it’s probably one of the cheapest mounts available that gives you this sort of capability.

Like many of the best mounts, this option is going to be able to support quite a heavy optical tube, with a maximum payload capacity of around 30lbs. This means you can get a telescope with a large focal length and larger magnification, which is necessary if you want to see deep space clearly.

The mount itself is actually quite heavy at almost 29lbs in weight, so it’s not the ideal mount if you’re looking for something portable. However for its price, it’s very hard to beat this Astroview EQ Mount, as it allows for accurate tracking and will keep your equipment stable. But, as you’d expect from any motorized EQ mount, it’s probably going to be a bit too expensive for most people.

Verdict: For those looking to get into Milky Way photography without the high price tag usually attached to it, then this cheaper Orion mount could be perfect. It will allow you to use it for long periods without having to worry about any issues with your telescope or DSLR camera. 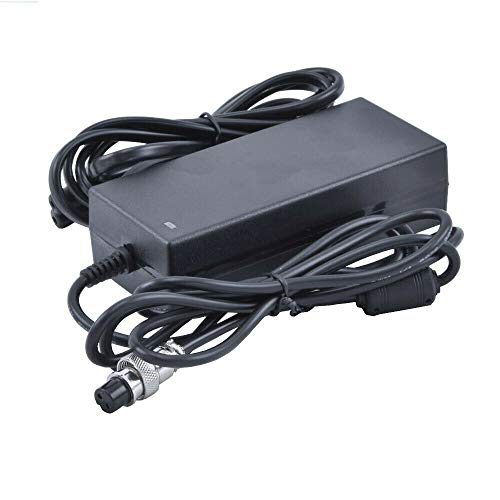 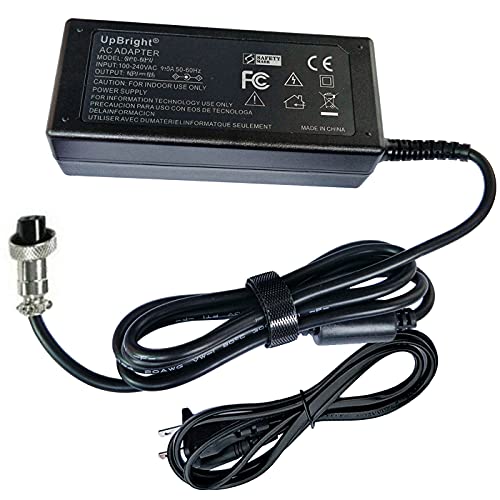 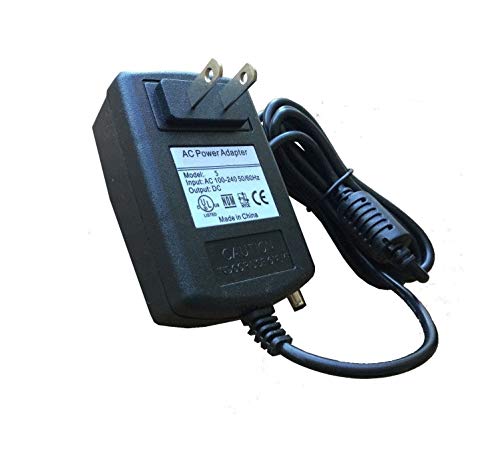 If you are looking for the best of the best, then the Atlas Pro by Orion is one of the top telescope mounts available, although it is very expensive. This is a North and South Polar alignment scope. This means that you’ll be able to adjust your latitude for accurate polar alignment, which is an important part of an astronomers arsenal.

Obviously the main attraction point about the Atlas Pro is that it can actually hold two telescopes at once. This can be great if you want to use two different types of telescope simultaneously, like a APO refractor for astrophotography and a computerized telescope to find visible objects in the night sky.

It has the capabilities of both an equatorial mount and an Altaz, so you get the best of both worlds. It can hold up to 44lbs of telescope, which is pretty impressive – you can probably get away with more than this though.

It comes with two 11lbs counterweights to ensure that you’ll be able to balance any telescope. The polar alignment feature is very easy to use and allows you to align your telescope swiftly and easily. Obviously, the only downside to this telescope mount is the price, but for serious astronomers this could make a great investment.

Verdict: For a step up in quality, this is one of Orion’s high end mounts that is perfect for increasing tracking accuracy and long exposures.

When we’re talking about telescope mounts, we generally split them into two different types – equatorial mounts, and altazimuth mounts, which you might see shortened to Alt-az.

The difference between the two is than whilst an Alt-az mount can move in both an vertical and horizontal direction, when an equatorial mount is restricted to following the right ascension axis which, when properly aligned, allows you to follow the stars and sky easier. An equatorial mount can compensate for the Earth’s rotation.

How does an equatorial mount work?

The Earth turns around in a full rotation in around 4 minutes less than a full solar day – we call this a sidereal day. Azimuth, or horizontal, keeps your mount parallel with Earth’s rotation. Altitude, or vertical, adjusts your latitude on earth. This ensures that your telescope can be used literally wherever you are on Earth, whether you’re in the United States or Australia.

Then, you need to ensure your telescope is pointing at magnetic North. From there, we can find the North celestial pole (NCP), which is where the Earth’s axis intersects with the celestial sphere.

When your equatorial mount is properly aligned, then you can use it easily to track stars in the sky. You can use the declination axes for pointing where you want in the sky, which you can adjust with the right ascension axes. This sounds quite complex, but the reality is that you can do it quite easily if you follow a simple online guide.

Do I need an equatorial amount for astrophotography?

I want to do astrophotography with an Altaz mount. Any tips?

If you do want to partake in astrophotography with an Altaz mount, then here’s a few tips to get the best results. Firstly, you’ll want to choose high ISO rates on your camera – this is necessary for getting rid of any motion blur. Secondly, I’d advise that you use a focal reducer to help increase your lens speed. Thirdly, you will probably need to take loads of short exposure shots together.

Why are telescope mounts so expensive?

It’s a commonly asked, and pretty fair question if you ask me. Often, telescope mounts can be even more expensive than the telescope itself! Many people think that the materials are the reason why a mount is expensive, but this isn’t the only reason why premium mounts are more expensive. Many top quality mounts actually take a lot of machining work to make them. Some of the more expensive mounts are essentially made in limited quality to demand, which there isn’t too much of as astronomy still isn’t a major hobby for most people.

What is a GoTo Mount?

A GoTo mount is well, pretty much exactly what it sounds like. It’s a computerized telescope, which you can select an object in the sky which you want the mount to “GoTo”, without having to find it manually yourself. This type of telescope can be a good choice for beginners who aren’t exactly sure where to start.

Why are telescopes even mounted?

Another common question I get asked is why telescopes are even mounted in the first place. Well, you only have to look at binoculars and spotting scopes to see that it isn’t a necessity to have a scope mounted to be able to use it. But generally, telescopes are mounted firstly, to give the support needed for a heavy piece of equipment. And secondly, it allows you to follow the movement of starts based on the Earth’s rotation.

A telescope mount is probably the most underestimated part of your astronomy setup, and it’s a crucial piece for those interested in astrophotography. Whilst an Alt-az mount will be easier to use for most people and especially beginners, at some point you’re likely to want to change to using an equatorial mount (unless you’re using a computerized telescope).

There are various different telescope mounts out there to choose from, and it can be difficult to know which to choose. Hopefully, this has given you a little more insight into what to look for when buying a telescope mount.